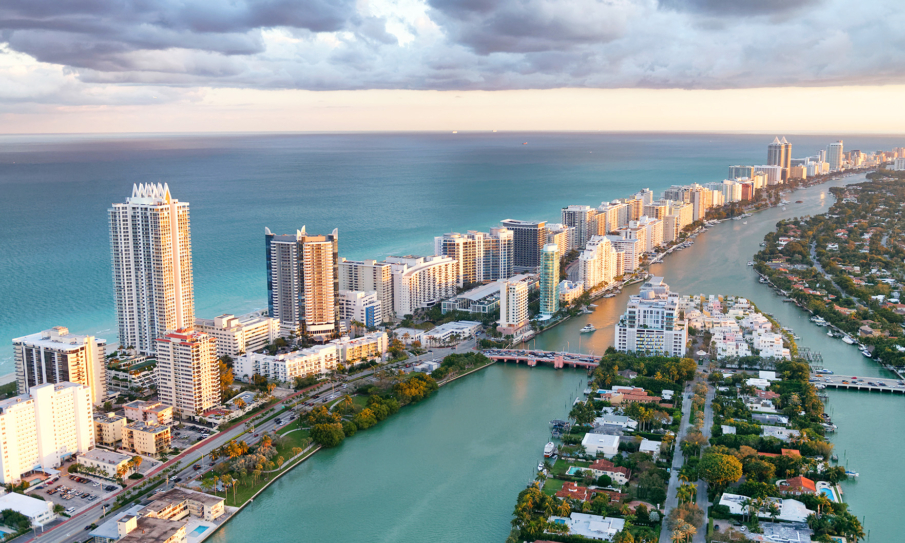 Stunning Aerial view of South Beach. Ocean, Park, and skyscrapers. Amazing skyline. Miami Beach. Florida.
Condo sales in Miami-Dade County remain strong, with record increases, after the collapse of the Champlain Towers South in Surfside, the Miami Realtors® Association said in a statement.
Miami-Dade County totaled 1,030 transactions from June 23rd through July 7th, a 159% year-over-year increase, according to the association. The county had 397 sales during the same timeframe last year.
“Pending sales are rising when compared to last year,” said Eric Firestone, South Miami office manager for Elite Ocean View Realty. “Miami-Dade has over 1,600 pending sales, up by about 78% from 927 pending sales from June 23rd through July 7th from the year prior. We are seeing these contracts close.”
Existing condominiums, one of the hottest markets in the U.S., fueled by pent-up demand from many U.S. companies and individuals moving to the region, continue to post robust record-breaking sales figures. A review of the condo market after the tragic collapse of the Champlain Tower South condo building in Surfside includes a comparison to the immediate previous period as well as prior years.
The Miami condo market is large, diversified, and boasts strong market fundamentals such as annual population gains, top destination for international homebuyers, huge domestic demand, and the nation’s strongest building code.
“Our thoughts and prayers continue to go out to those affected by the Surfside tragedy,” said Jennifer Wollmann, Miami Realtors® chairman of the board, in a release. “We hope and pray that no other residents or their families will ever have to go through something so terrible. We are proud that Miami-Dade County has what is probably the strongest building code in the nation starting in 1994 and the first county in Florida to enact the 40-year recertification in 1974.”
U.S. individuals and companies, particularly from tax-burdened, high-density areas, continue to purchase Miami condos because Miami is known for pro-business governments, low taxes and a healthy lifestyle.
Wollmann added that they have received a number of inquiries about the impact on the overall condo market since the recent Champlain Tower South building collapse on June 24, 2021, so they have compiled the following statistics on closed sales and on pending (properties with contracts):
“Buyers are feeling more secure because of the required increased condo inspections from the municipalities,” said Firestone. “It’s still a busy market and both buyer and seller agents are still working hard.”

The South Florida Building Code, first adopted in 1957, is the nation’s most rigorous because it protects structures from the ocean, hurricanes, and salt air.
After Hurricane Andrew in 1992, Miami’s building code was overhauled starting in September 1994 with hurricane mitigation provisions. Over the years, the code was modified on several occasions. Florida adopted Miami-Dade’s code with statewide reforms in 2002. Florida’s statewide code is not as stringent as Miami-Dade.
The South Florida Building Code requires newly built homes to have stronger fasteners for roofs, nails instead of staples, and impact-resistant windows. In Miami and Broward, local code requires lab-tested, wind-resistant design for every new building’s entire envelope (including windows, doors, and eaves).
Across most of the state, developers have been required since 2002 to build structures that can withstand winds of 111 miles per hour. Miami-Dade and Broward's counties have stronger requirements. Locally, structures must withstand, at a minimum, winds of 130 miles per hour.
Miami’s building code helped minimize damage from Category 3 Hurricane Irma in September 2017. Miami-Dade County’s housing stock had little to no structural damage from the storm. A few Miami neighborhoods flooded, but the buildings were prepared for it with floodwalls and proper sewage.
Miami-Dade County was the first county in Florida to enact a 40-year recertification process and subsequent 10-year recertification for buildings in 1974. Broward County followed in 2005.
Most cities and counties in the U.S. do not require this recertification, including Palm Beach County, but since the collapse in Surfside, they are considering new regulations.

Oceanfront Half Floor Residence in The Mansions at Acqualina

Sold! The Estates of Acqualina Residence 2302

Succulents & Sips at Time Out Market

The Estates at Acqualina Tops Off in Sunny Isles at 52 Stories, 672 Feet

MIAMI MAY CLAENDAR OF EVENTS