By Ashley Portero – Reporter, South Florida Business Journal
Miami as the next Silicon Valley? A few years ago, that suggestion could have you laughed out of a room.
But nobody’s laughing now.
That vision seems more attainable since Covid-19 caused a surge of technology founders and venture capitalists from California and New York to flock to South Florida in search of larger homes, better weather, and less-stringent quarantine restrictions.
The relocation trend exploded after Miami Mayor Francis Suarez and Founders Fund partner and “PayPal Mafia” member Keith Rabois teamed up to hype #MiamiTech on social media. The goal? To draw new startups, investors and – hopefully – jobs by branding the Magic City as the country’s next major tech hub.
So far, their social media strategy seems to be working.
Miami has caught the attention of high-profile people in the startup world, a promising step toward South Florida’s nearly decade-long quest to create a technology sector that rivals San Francisco, Seattle, and New York City. Miami’s international connection is part of the allure, but the influx of thought leaders and investment capital stands to benefit the entire tri-county region.
Prominent tech investors including Rabois, Shutterstock founder Jon Oringer, venture capitalist David Blumberg and former PayPal and Intuit CEO Bill Harris have moved to South Florida over the past year, citing the region’s pro-business policies as a draw.
Startup founders and venture capitalists who followed say they’re attracted to Miami’s lifestyle, lower cost of living and culture that embraces business. It’s in contrast to states where there are efforts underway to raise taxes on wealthy residents and corporations, they say.
“In Miami, there’s a mentality that if people come here and create value, that will benefit the whole area. It’ll make the pie bigger for everyone,” said Edward Lando, who started Pareto Holdings in Miami with Oringer. “That mentality isn’t found everywhere.”
Despite some successes, it’s unclear whether the excitement about South Florida’s ability to foster innovative companies will lead to significant high-quality job commitments or bigger investments for local ventures over the long term.
Why Miami?
Shutterstock’s Oringer said Miami reminds him of New York in the early 2000s, when technology companies were just beginning to take root: optimistic, collaborative and full of possibilities.
That’s what brought him to Miami in mid-2020, when he purchased a home in the area and launched Pareto Holdings with Lando, a serial entrepreneur who also serves as CEO of tech startup Goody.
“[Miami] has a lot of potential, but it still needs big companies to cement that and [help] create a lot of other successes,” Oringer said.
Florida’s absence of a personal income tax – and, as a result, capital gains taxes for individuals – is another attraction. It’s a notable contrast with California and New York, where personal income tax rates top out at 13.3% and 8.82%, respectively. (New York City imposes a personal income tax on residents, on top of the state tax.)
A recent California initiative to force businesses to treat gig economy workers as employees, rather than independent contractors, also soured relations with some tech ventures. The referendum, which was ultimately rejected, threatened to undo the business models of on-demand companies such as Uber that rely on low-cost labor.
But insiders insist Miami offers more than tax savings. The greater Miami metropolitan area is among the most diverse in the nation, with a tech ecosystem populated by Black, Hispanic and female founders, thought leaders and tech talent.
That combination of cultures and world views could be a competitive advantage, said Laura González-Estéfani, founder and CEO of Miami-based venture capital firm TheVentureCity.
González-Estéfani, an early Facebook executive and former Bay Area resident who relocated five years ago, said the closed culture of Silicon Valley was a disadvantage for startups trying to solve problems the U.S. tech elite didn’t even know existed.
“They were more comfortable investing in founders they knew, someone they could go on a bike ride with,” she said.
González-Estéfani said there’s more opportunity than ever to support innovative ventures in Latin America and other emerging international tech markets. Miami’s culture, heavily influenced by immigrants, is an advantage for investors doing business there. 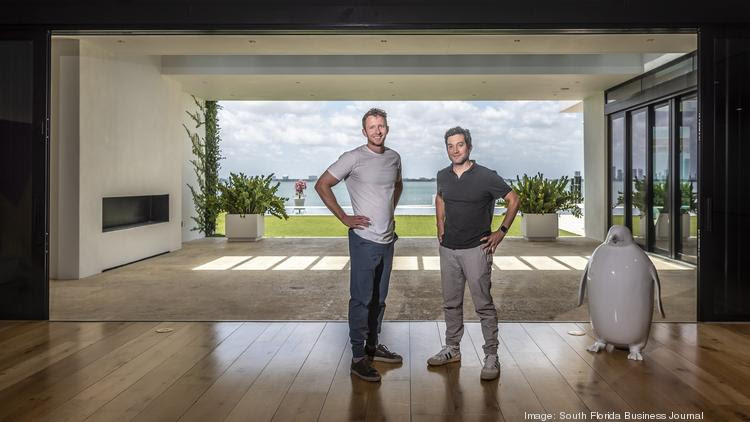 Jon Oringer, founders of Pareto Holdings, at Oringer's home in Miami Beach.
JOCK FISTICK / SOUTH FLORIDA BUSINESS JOURNAL
Years in the making
To outsiders, the #MiamiTech movement seemed to pop up overnight.
It’s actually the result of years of work by organizations including the Knight Foundation, Endeavor Miami and eMerge Americas, local stalwarts that began championing the area’s startup community almost a decade ago.
South Florida-based companies like augmented reality startup Magic Leap and “unicorn” Reef Technology were making waves long before Covid-19. Coding boot camps such as Wyncode Academy, recently acquired by BrainStation, emerged to train locals for in-demand tech positions.
That created a solid foundation for recruitment when Suarez launched what became his viral social media effort aimed at bringing investors, founders and companies to Miami.
And civic leaders are welcoming everyone with open arms.
Angel investor Kim Perell said she was embraced by South Florida’s tech community when she moved to the area early this year. Perell relocated to launch digital branding startup 100.co – drawn, like other startups, by Suarez’s message.
“There’s a thriving entrepreneurial community that wants to collaborate and create,” she said. “It’s not about where you’re from; it’s about what you want to build.”
100.co co-founder James Brennan agrees.
A serial entrepreneur who previously founded Suja Juice, Brennan said he figured the buzz surrounding Suarez’s “How can I help?” campaign was all talk until he decided to send the mayor a message on Twitter to confirm. It was mostly a test; Brennan hardly expected to get a response. Suarez wrote back within hours.
“From the perspective of a business owner who’s getting ready to move and invest a ton of money and effort in Miami, that was comforting,” Brennan added.
Not quite Silicon Valley
There’s no doubt that Miami has claimed considerable wins for its technology and innovation sector. But it remains to be seen whether the social media hype and national spotlight will lead to substantial job opportunities for locals.
There are positive signs.
Several companies – including Spotify and Blackstone’s technology operations – have leased office spaces with plans to hire hundreds of employees. SoftBank Group created a $100 million investment fund for Miami startups. Miami Tech Week, an impromptu series of events organized by a coalition of new and longtime tech advocates, is already on the calendar for 2022 after attracting hundreds of participants in April.
Younger tech workers are paying attention. According to LinkedIn data, there were 15% more software and IT workers in South Florida in February 2021 than a year before, a trend driven by younger workers moving away from traditional tech centers such as San Francisco, New York, Seattle and Boston.
“What these last few months has shown us is that, beyond the premier quality of life here, businesses are eager to build in Miami because they feel like we are as invested in their success as they are,” Suarez said.
Suarez and economic development organizations including the Miami-Dade Beacon Council will continue to recruit tech ventures while the iron is hot.
Beacon Council Executive VP Matt Haggman, a longtime Miami tech advocate, says it’s a chance to import new, lucrative career opportunities into a region still dominated by lower-paid hospitality and tourism jobs. It’s also a chance to champion local entrepreneurs, especially minority- and women-led ventures that historically struggle to raise capital on par with their white, male counterparts.
Not that there won’t be challenges along the way.
Haggman said the influx of new residents and wealth is likely to exacerbate Miami-Dade’s already severe housing crisis. It’s an issue that poses headaches for businesses in downtown districts that can’t hire enough workers because prospective hires often cannot afford to live nearby.
But the long-term benefit of building a strong tech sector outweighs the risks, he added, as long as South Floridians don’t get lost in the shuffle. Haggman said the region needs to double down on university programs, workforce training, and coding boot camps to provide Miami students and residents the skills they need to compete with job seekers from longtime technology hubs.
“We can not only build an ecosystem that drives innovation and job growth, but one that expands opportunity and achieves real social mobility,” he said.

Oceanfront Half Floor Residence in The Mansions at Acqualina

Sold! The Estates of Acqualina Residence 2302

Succulents & Sips at Time Out Market

The Estates at Acqualina Tops Off in Sunny Isles at 52 Stories, 672 Feet

MIAMI MAY CLAENDAR OF EVENTS